Last Saturday I had the pleasure of attending the penultimate performance of the play, Henry V, by the Brussels Shakespeare Society. A performance by a talented group of actors as part of their first annual Shakespeare Summer Festival. Locus operandi was the Theâtre La Balsamine in Schaerbeek (that I got to know earlier through the Spanish theatre company TeatroBe).

Shakespeare’s work is part of the classical repertoire, but that does not make it any less topical. The power of his words does not wane through the ages. Precisely because it is the words that are key.

Henry V is a history play by William Shakespeare, written around 1599. It tells the story of King Henry V of England, and focuses on the events before and after the Battle of Agincourt (1415) during the Hundred Years’ War (a series of conflicts and wars between England and France during the fourteenth and fifteenth century). As the final part of a tetralogy, the play is preceded by Richard II, Henry IV, Part 1, and Henry IV, Part 2.

In early fifteenth century, King Henry IV has passed away, and his son, the young Harry, has just risen to the throne. Successive civil wars have strained the political situation in England. Henry V wants to regain the respect of his subjects. Based on his ancestry, he claims the French throne. Supported by the English nobility and clergy, Henry begins to prepare his army to invade France. The English sail to France and fight their way through the country. They are in the minority, but still manage to win. They conquer the city of Harfleur, where Henry gives a passionate speech to his soldiers. As part of the subsequent Treaty of Troyes with France, Harry wins Kate (Catherine of Valois, daughter of Charles VI ‘le Fou’) to ensure the linking of the two countries through marriage.

I am a sucker for minimalist theatre where content is king, and with their version of Henry V, the Brussels Shakespeare Society has more than met my needs. The Elizabethan stage lacked scenery, and so did the stage of the Theâtre La Balsamine. In the prologue of the play the Chorus apologises for the limitations of the theatre. Director Stephen Challens said that it was the hardest, but also the most rewarding play that he ever directed. It was therefore his merit to make the difficult seem easy: “All things are ready, if our minds be so.”

Without prejudice to the rest of the cast and crew, I would like to highlight the acting performances of three players, who particularly attracted my attention.

In her role of Chorus, Claudia Wilson delivered an extraordinary performance. The role of the Chorus — even though only one person in Elizabethan theatre — should not be underestimated. In a minimalist setting with minimal changes of scenery, the Chorus takes care of the ‘ad spectatores’ to create the transitions and the continuity of the play. With her almost invisible visibility — sometimes it seemed like she was going to shrink into thin air — Ms. Wilson achieved this assignment with flying colours.

London-based actor Jackson Wright created a most rightful King ‘Harry’ Henry V. Harry le Roy, who, as a nobleman, had to leave his days of mischief and hanging around with his roguish friends behind him. King Henry V, who carries the huge responsibility of leading his armies in a war against France and living up to his father’s memory.

Alex Diaconu shined in the role of the dauphin Louis, Duke of Guyenne: a decadent, effeminate and fickle heir apparent to the throne of France, who has nothing to offer but two offensive tennis balls.

Although the piece — as far as I could judge with my knowledge of Shakespeare’s work — remained very close to the original text (which can only be applauded), director Stephen Challens also has managed to give it a contemporary touch. He did this mainly by choosing modern rock music as the musical backdrop for the mass and war scenes, and he even smuggled in a football song to auralise England’s victory over France. Another cleverness, was how he moved the dramatis personæ to the end of the performance, where the characters introduced themselves to the public during the applause.

As one of the performing arts, theatre is direct and honest. Each performance is unique, and with each performance, the audience is also unique. So with each performance you only get but one chance to shine and to convince. And shine and convince was what this performance of Henry V directed by Stephen Challens did. The troupe of the Brussels Shakespeare Society is one to keep an eye on, and one that will undoubtedly appear more often on my cultural must-see list in the future. 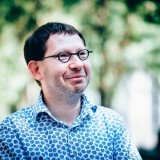